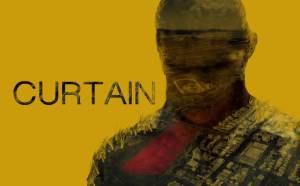 Curtain is a true crime podcast focused on the case of Kevin Henry, nicknamed Curtain, who has been wrongly imprisoned for 25 years in Queensland. He was falsely convicted of murdering a woman named Lynda (for cultural reasons her family name is not used) and has finished that sentence, but cannot get released.

The podcast was recently named one of the top true crime podcasts by Vulture. It’s hosted by journalist Amy McQuire and lawyer Martin Hodgson. In the first episodes, they go through the details of the murder case and it’s botched investigation. I love the way they do this – Martin explains everything simply and clearly, and just I was wondering about something, Amy jumps in with the exact question I had with “Martin, how do we know that…?” and he explains that too.

Amy travels to Rockhampton to look at the scene and interviews people who had some involvement in the case. They also interview experts in false confessions, cultural knowledge, and crocodiles! In more recent episodes they cover similar cases of injustice for Aboriginal people such as Ms Dhu, Mark Haynes and Derek Bromley. They also look into the situation (complete inaction) at Don Dale Youth Detention Centre in the Northern Territory.

If you are interested in how the Australia deals with issues with the professionalism and bias of our police, courts and prisons, I highly recommend Curtain. It’s been running for 2 years now (with breaks) and the episodes are short and punchy. I’ve learned a lot about recent history, and about the Rockhampton area of Queensland as well. I’m very grateful to folks on Twitter who both recommended it to me last year.